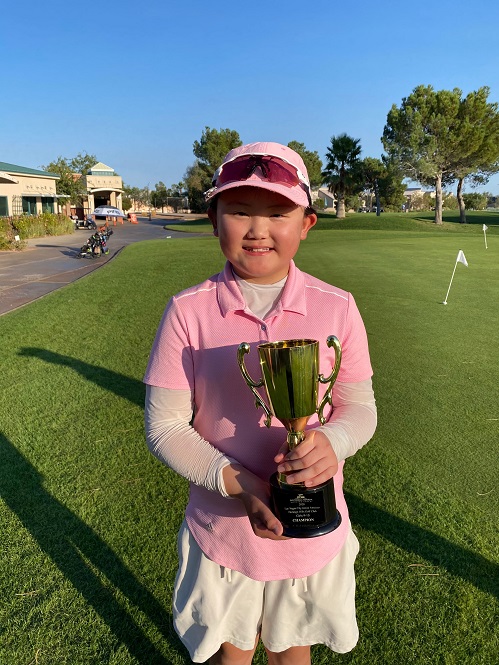 When 11-12 division winner Anderson Lee drove the green on the final hole–he hit it 310 yards–of the Las Vegas City Junior Amateur at Durango Hills to make birdie and clinch the victory, it was a crowning moment of the boys and girls ages 9-12 tournament. Joining Anderson as champs were Ethan Lee (boys 9-10), Tiffany Park (girls 9-10) and Emmerson Hinds (girls 11-12). —By Brian Hurlburt, Las Vegas Golf Insider.

Emmerson Hinds, a student at Bob Miller Middle School, finished at 7-over par over the two rounds ran away with the Girls 11-12 division over runner-up Milan Norton.

“I am very happy and proud of myself to win this tournament, and it is a reward for working hard,” said Hinds, a student of Shawn Callahan at the Butch Harmon School of Golf. “My ball striking was very good and my chipping was good, too. Also, I want to thank the SNJGA and Durango Hills for holding this tournament.

Anderson Lee defeated Ethan Long and Brent Chung by three shots in the two-day event, finishing  at 6-over par. Besides the huge drive, he was happy with many parts of his game.

“My irons were great and I hit a lot of very good putts, also,” said Lee, who attends Del Webb Middle School and works with Siena instructor Bo Im. “The last drive was great, but I also hit my 60-degree wedge to one-foot from the pin and made birdie on the 16th hole.”

Tiffany Park won the 9-10 girls division by four shots over Sage Parry. It was her first tournament victory of her young career.

“I wanted to win, but I didn’t expect it and I was very excited,” said Park, who attends Challenger School and also works with Siena’s Im. “It was kind of hard to play two rounds because you have to keep your mind right. I tried to improve each hole and didn’t let bad holes get me down. I think it was the best I ever hit my irons, hybrid and woods.”

Ethan “Radar” Lee came back from a three-shot deficit to win the Boys 9-10 division by a single shot over Tripp Hildreth. Some solid work on the greens was a key to the victory, as he finished 11-over par over the two days.

“My putting really saved me,” said Lee, who attends Pinecrest Academy Cadence and is coached by his mom (Stephanie) and dad (Gene). “My chipping wasn’t great on the front nine, but I made a lot of putts.”

Lee also said be focused on his pre-shot routine and that allowed him to keep his shots online and the correct distances. In addition to other elements, his pre-shot routine includes a deep breath in and out prior to his swing. Lee also has an Insta and YouTube social media at @radarleegolf.