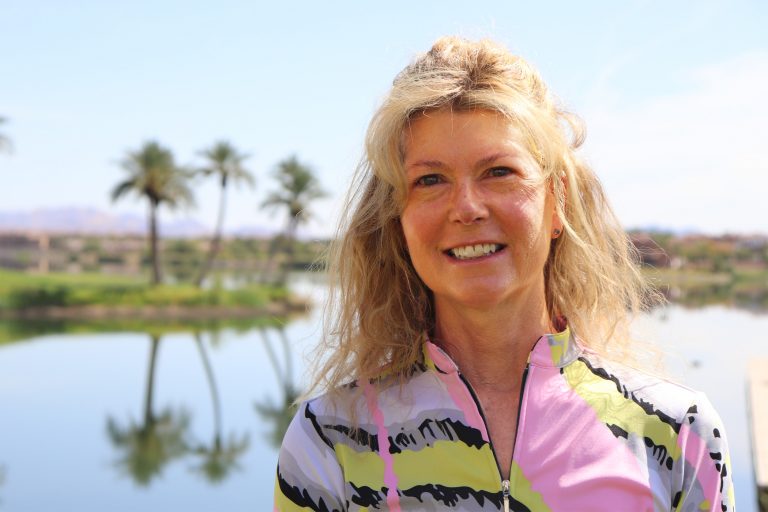 Posted at 17:57h in Alumni, Featured, News by asunstrum

If you’ve played or been around junior golf in Las Vegas, there’s no doubt you know the name Nicole Dutt-Roberts. Starting with her playing days in the 1970s as a junior, Dutt-Roberts has always been involved as a player, volunteer or coach working with juniors in the Southern Nevada Junior Golf Association. Golf has always been more than a game to her, as it becomes for many former junior players. –by Bill Bowman, Las Vegas Golf Insider Staff.

Dutt-Roberts started competing on the golf course when she was 12 years old and went on to play at the collegiate level for Weber State University in the early 1980s. She also played in a variety of local amateur tournaments, including the 1986 Nevada State Amateur, when she claimed the title. She turned pro in 1990 and earned her PGA status eight years later while working for her mentor and PGA pro and Las Vegas Golf Hall of Famer, Jerry Roberts, as a golf instructor at Spanish Trail Country Club.

She then was inspired to give back to the game that has given her so much.

“I started volunteering around 1987,” Dutt-Roberts says. “I had gotten a call from the SNJGA to take on the Junior America’s Cup team. It was special to me because it was a team I played on for four years. I turned 21 that year and they needed someone so I did that for four years as a volunteer.”

Throughout the years she has continued to help junior players improve their games and grow their love of the sport.

Since her volunteer days, she’s spent her time working to ensure junior golfers in the Las Vegas area learn the game the right way and also have places to tee it up and practice as well as having tournaments to play in and against top competition.

Now, she’s leaving the SNJGA grant writing and fund-raising portions of the program after years of service, but not leaving junior golf. She will still work with juniors through the First on Course program that helps kids get started. She, along with Las Vegas Golf Hall of Famer Kerri Clark, will also remain captains of the Girls Junior Americas Cup team that represents Las Vegas.

“The SNJGA started the First on Course program in 2016 and it’s a program that we call ‘quality golf lessons at an affordable price,’” she says. “The SNJGA has clinics with six or seven instructors at various courses and the word is getting out about the program. When I started doing this ,I had two kids in my class. Now I’ve got between 14 and 17.”

Dutt-Roberts says helping out the SNJGA with fund-raising and grants was definitely rewarding, but now it’s time to hand those reigns over to others in the association.

“I spent two years helping build back up their grants and also working with the fund-raisers,” Dutt-R0berts says. “Now they have a good template and a couple of board members who came on board in 2019 who can help out. I feel like this will continue.”

One of the main reasons she’s cutting back her workload is to take on another task, which is golf-related, of course.

She’s taking her teaching skills out to Reflection Bay and will work alongside her brother, Eric Dutt, the resort’s GM, to bolster the junior game.

“I’m not going to leave my First on Course kids,” she said. “The grant and fund-raising is just something that other people can handle and I can move forward with other things I want to focus on. We want to introduce golf programs to kids in that area.”

For Dutt-Roberts, the goal has always been a simple one. “The ultimate goal would be a golf scholarship for these kids,” she said. “But there’s more. There are life skills to learn and golf can open so many doors. As long as we make it fun for them and it’s a positive experience…that’s priceless to me.”