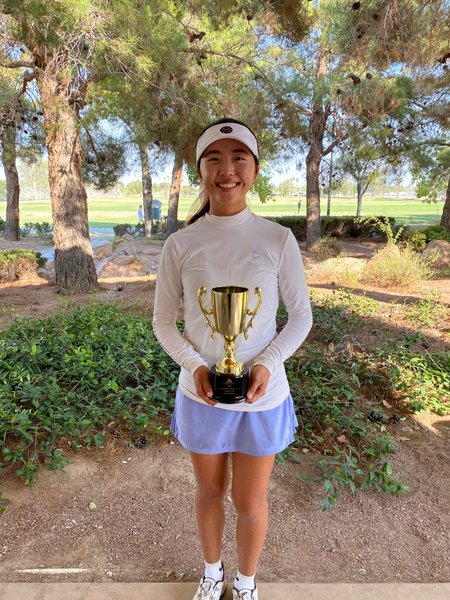 Jackson Parrish played Dr. Jekyl and Mr. Hyde with his two days of tournament play, coming away with a one-stroke victory in the Boys 15-18 bracket.

Parrish opened with a four-over-par 76 and followed that up with a nine-under-par 63. The final round included seven birdies, an eagle and no bogeys.

“I had so much more fun today,” he said with a laugh. “(Saturday) was the most frustrating round I played all summer. I just couldn’t get anything going. I hit good putts but nothing fell for me.”

“I putted way, way better, he said. “I finally played the way I should have played yesterday.”

Even after his bad first round, he stayed positive.

“I told myself I was only six shots back,” he said. “Well, that is kind of a lot but I’ve made comebacks like that before. It was just a matter of finding that zone where everything comes easy and I found it for most of the round.”

He added one of his key holes was an eagle on the par-5 9th. “That helped a lot,” he said. “I didn’t think I hit that great of an approach shot but the eagle putt fell. It wasn’t that easy of a putt but after yesterday, it was nice to have a lot of putts fall. When I have a hot putter, it takes the pressure off the rest of my game.”

Parrish is a senior at Coral Academy of Science and plans to head to college at the Colorado School of Mines.

“I’m very happy,” he said. “I get the best of both worlds…I get to play on a good golf program and get to attend a great engineering school.”

Joanne Lee played steady golf–if she made a bogey, she offset it with a birdie (or in one instance an eagle)–and recorded a victory in the Girls 15-18 age group.

Lee said the key to the win was the par 5s.

“I just knew the par 5s were super short and I tried to take advantage of that,” said Lee, a sophomore at Coronado High School. “My second shots, especially on the par 5s, were really good and set me up nicely. I played consistent golf. Playing for par is always my goal. If you don’t cross over and go above par, you’ll probably have a good chance.”

But, despite the win, she knows there’s still work to be done.

“I definitely want to increase my driver yardage,” she said. “It would give me a little more of an advantage.”

She added working on her putting is also front-and-center in her plans.

“I really want to make my six-footers more consistently,” she said. “In the end, those can really affect the scorecard.”

She learned that first-hand in the final round.

“On the first hole I missed a two-footer for par,” she said. “I just said, ‘oh, can I finish this?’ and then I just missed it. I was pretty much on edge for a while after that but I got it back on track after a couple more holes.”

Bradley Bourn birdied two of his first three holes in Sunday’s final round en route to a seven-shot victory. Bourn added two more front-nine birdies and made the turn at four-under-par and cruised to the title.

He did stumble on the back nine with three straight bogeys but righted the ship with a final birdie on the 15th hole. For the two days Bourn put nine birdies on the scorecard.

“It was kind of up and down,” the Doral Academy freshman said. “I played pretty well but had a couple of mistakes.”

Two of those were the final two holes in the first round where he finished up double bogey, bogey.

“It wasn’t a good way to finish but I just thought about letting it go and coming back (Sunday) and going as low as I can,” he said.

He did just that with his sizzling start in the final round.

“Yeah, I did play well…on the front nine,” he said. “My mid-irons and putting were solid. I had a couple of birdie putts from 15-20 feet and those are always nice.”

Then came the three straight bogeys to start the back nine.

“It started with No. 10,” he said of his three-hole struggle. “I had a 10-foot birdie putt that was straight downhill and I hit it about 20 feet past and wound up with a bogey.”

Both days he said his frame of mind helped him get back on track.

“I got a little frustrated for a bit a couple of times but then I let go of it,” he said.

He said his plan is to keep working on the mental side of his game as well as the golf aspect.

“I’ve got to play all 18 holes consistently rather than just some of the holes,” he said. “I need to stay focused.”

Haram Lee had a rollercoaster ride in winning the Girls 13-14 championship. Lee posted seven birdies and 11 bogeys and went on to post a five-stroke victory.