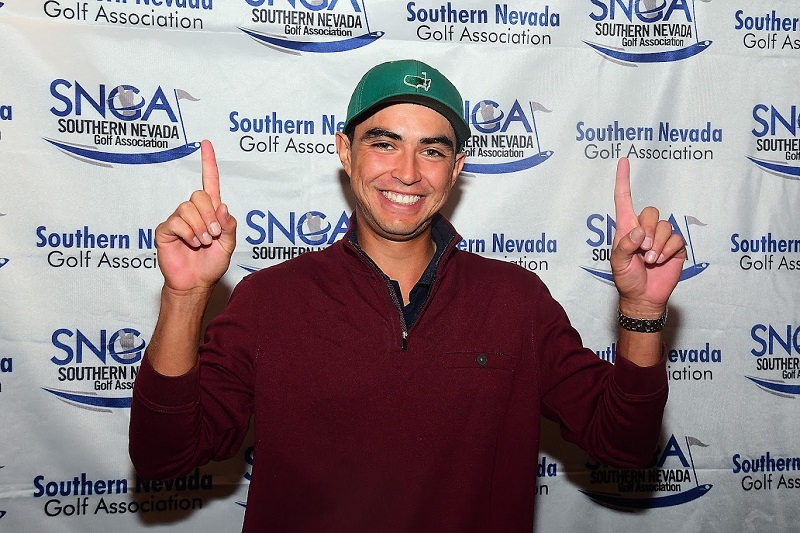 Smith, 20, grew up playing golf for fun with his father, but soon realized there was a whole new world surrounding the sport.

“When I was introduced to the game of golf in the very beginning, before I joined junior golf, it was just a game,” Smith said. “But when I joined junior golf, such as the First Tee of Southern Nevada and also the SNJGA, and it helped me understand that there’s more to golf than just the game. It’s the best sport out there because the mentality, the stamina and the respect that it takes. My coaches in the past have taught me that like Jim Hart, for example, who got me interested in the game. And that’s what kind of defined my experience in junior golf, because when I was introduced to that aspect of it, that’s what motivated me to keep getting better because it helps out in life as well. I figured that if I could get great at the game of golf then it would help me in everything that I do in my daily life.”

Smith played at Western High and then at North Idaho College, but even with a couple years eligibility remaining, he believes his future lies in other aspects of the game, whether playing professionally or possibly caddying. Or who knows what else. He has caddied at prestigious clubs in Colorado prior to earning the bag at Augusta National.

“A lot of kids dream about being able to get out at Augusta and being able to play the golf course, which I’ll be fortunate enough to do,” Smith said. “I remember stepping out on the golf course on my second day here in Georgia and having all of these expectations about this place. Everything I have experienced has lived up to every single expectation that I had about the property. You step on the property and there’s just this ambiance that no other golf course has. And the people there and the members are amazing. It’s just a great place to be.”

A former college teammate helped Smith get into caddying and then his work ethic, golf knowledge and kind nature helped secure the spot at Augusta National. Along the way, Smith has been helped by Hart, Nicole Dutt-Roberts, Eric Dutt, Craig Barlow and others within the Vegas golf community.

Smith comes from a hard-working family and due to limited financial funds has received the help to make the journey a bit easier. But it has always been more of a hand up than a hand out. He has taken advantage and made believers of those who have supported him. He recently won the 2022 Southern Nevada Golf Association Tournament of Champions gross division title.

“Jared is a just a hard-working, respectful young man and that is why people have wanted to help him,” said Eric Dutt, himself a former SNJGA member some five decades ago. He now is Reflection Bay director of operations and a Las Vegas Golf Hall of Fame member. “He is a nice young man and he deserves every opportunity he gets because he has earned it. When I was a young player, there were people in the Las Vegas golf community who helped me when they didn’t have to and that is why I try and give back and help people like Jared. It’s not easy to become a caddie at Augusta National, so that should tell you right there the type of person he is.”

For Smith, the SNJGA was the start of a tournament journey that he hopes ends on the PGA Tour someday.

“The SNJGA was a great introduction into the tournament atmosphere,” Smith said. “The first tournament organization that I joined was U.S. Kids, but I was only able to play a year with them before I aged out and joined the SNJGA.

“The only thing holding me back right now in pursuing professional golf full time is the money aspect. I hope to meet some possible investors in the future and I have already met some fantastic people. Now I am just waiting to see what’s going to happen in the future. Eric Dutt has already been helping me out over the past couple years and he and the people at Reflection Bay have been great. I work with Craig Barlow and hope to work with him on my game more.”

“All of this has been because of a dream of mine and sticking true to it has been the reason for the success and opportunities that have been presented to me, regardless of what other people say,” Smith said. “I feel like that has been the biggest motivator for me throughout this entire journey.”