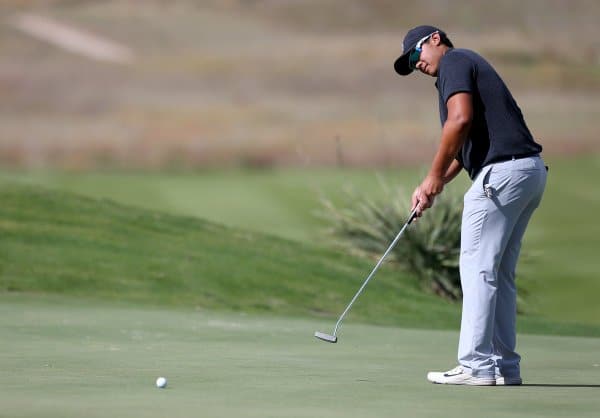 For Bradley Keyer, it was a chance to take a trip down memory lane. For the 25-year-old Keyer, the 2017 Nevada State Match Play champion, this trip didn’t happen that long ago. And with some knowledge gained from experience, Keyer wants to pass along a little bit of what the Southern Nevada Junior Golf Association meant to him in life … even while he’s still learning those lessons. –by Bill Bowman, Las Vegas Golf Insider staff.

“My junior golf experience was amazing,” Keyer said. “I met a lot of my friends that I still talk with to this day through junior golf. Even though we’re all in our mid-to-late 20s, junior golf taught us all a lot, even though we may not have realized it at the time.”

Keyer, who played golf for Coronado High School while attending Explore Knowledge Academy, went on to play at San Jose State before finishing up at Creighton.

Now, he’s back in Southern Nevada and honing his skills as he seeks that ultimate goal: professional golf.

“I got away from what I knew and what I was successful with,” he said. “Now, I’m making a lot of progress and grinding as hard as I can. I can see the improvements starting to take shape.”

But, chasing that dream comes at a price. And Keyer is more than willing to work to make it happen. He’s the outside services manager at Reflection Bay, which gives him the perfect spot to earn money as well get time to work on his game.

“I’ve been there for just over a year,” Keyer said. “Now I can set up my schedule to work in the mornings and then play and practice in the afternoon. It can be long days, but I still get the chance to chase what I love to do.”

“He’s kind of been my mentor,” Keyer said. “I’ve known him since I was 12 and he’s always been very supportive. He gave me a chance here and I’m grateful. I’ve worked hard to make sure he knows he made the right decision.”

Keyer knows the path to any tour play isn’t going to be easy. But that’s OK: he knows it’s a dream a lot of people are chasing and he’s ready to put in the work to make it happen.

And he knows there’s still work to be done with his golf game.

“My game is still a work in progress,” he said. “It’s probably about a six or a seven. But that’s OK. I’m making a lot of progress as I’m rebuilding my game. With the support of friends and family as well as understanding what the ultimate goal is, I’ll get there. I’m just happy to be playing golf again.”

And those thoughts take him back to his junior golf days.

“Looking back you remember how you got to interact with people both on and off the golf course,” he said. “And the SNJGA was tremendous in all of those aspects. It was about making sure you’ve got good character, that you work hard, that you’re disciplined. In the end, all of those traits were as important as the number you posted on your scorecard.”