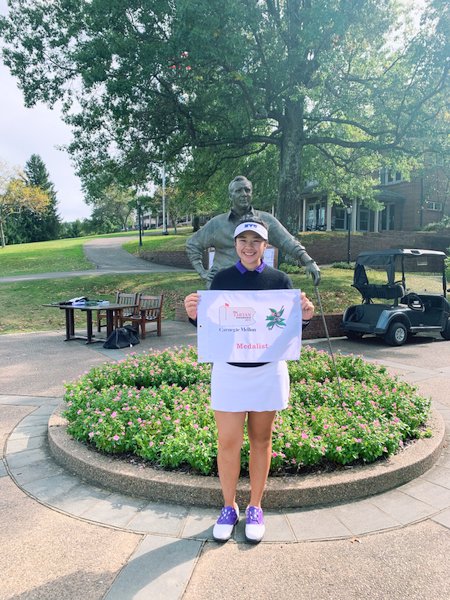 Posted at 15:05h in Alumni, News by Brian Hurlburt

For Ashley Lung, the numbers are all adding up to success. And that’s something the senior-to-be at New York University can handle. Lung is studying finance/accounting while helping her team shine on the course. And those numbers adding up? They are impressive. –by Bill Bowman, Las Vegas Golf Insider staff.

Lung played at Coronado High and helped her high school squad to a second-place finish in state her freshman year. The team then reeled off three-straight state titles with Lung capping off her career with a runner up finish in the individual portion of the tournament.

She said her junior golf experiences also helped pave the way to her success.

“I played in a few SNJGA events and they were great,” she said. “They were some of the most fun tournaments I played. You want to play those events to see if you can succeed against the best players around as well as those outside of Las Vegas.”

After her Coronado days came the transition to college golf and even more success. This past season at NYU was Lung’s best … until coronavirus shut everything down.

“I finished top five in three tournaments and top 20 in two other tournaments,” she said. One of those top fives was a victory in the Carnegie Mellon Invitational.

“I’m really hoping there is golf this year,” she said.”But we’ll just have to wait and see what happens.”

She said she sees her competitive golf career coming to an end when she leaves the NYU program.

“I don’t think there will be any pro golf for me at all,” she said. “I feel like when I made the decision to go to NYU I knew I would be trying to take a different route to balance a career along with golf.”

But she still has the memories, especially of her start in golf.

“It was just so much fun,” she said of her junior golf days. “You learned a lot and met a lot of great players. It’s something you never forget.”