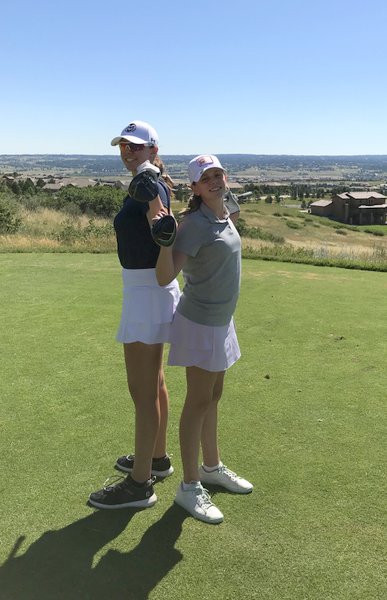 Sisters Cassidy and Samantha Phelan are quick to admit they are each others’ biggest cheerleader on the golf course. They have been playing SNJGA and high school events against each other since they picked up golf clubs 10 years ago. They say it’s helped them form an even stronger bond as sisters. — by Bill Bowman, Las Vegas Golf Insider staff.

Golf wasn’t the first choice when Cassidy was looking into sports as a youngster.

“When I was younger I tried every single sport,” said Cassidy, older of the two at 17. “I just never found a sport I liked. My mom (Angela) asked if I’d like to try golf and I said sure. I really liked it. And a few weeks later my sister said she didn’t want to be left out and wanted to try it and the rest is history.”

The sport has drawn them closer together.

“Our bond is very close, especially with golf,” said Cassidy. “We used to have a rivalry when we were younger but now we help each other out a lot. We’re sisters. We have to look out for each other.”

Paul Phelan, the sisters’ dad, said it’s been great watching the girls grow into the sport.

“It’s a very friendly rivalry,” Paul said. “They will help each other out. And Cassidy can drive now and will drive them to the course if mom or dad can’t take them. They’ll work on their games on the range and then play 18 holes. It’s just worked out great.”

Paul added the SNJGA aspect of their golf growth has also been a big help in their improvement.

“Golf is their life and it’s become our family’s life,” he said. “With the SNJGA tournaments it’s been enjoyable and they’ve made it more affordable. The girls have gotten to play a lot of great courses and the tournaments are run very well.”

In high school matches, the two go head-to-head as the No. 1 players on their respective teams, Cassidy at Southeast Tech and Samantha at Liberty.

Cassidy said the match ups in high school events can be a challenge.

“I want her to do well but I don’t want her to hurt my team,” she said. “We both love our teams so much. Once we hit the first shot, she may be my sister but at that time she’s just another player.”

Samantha said not playing in the same group with her sister does have its benefits.

“That’s why the SNJGA events are so good,” she said. “They usually try to put us in different groups even though we’re playing in the same age bracket. That lets us both just concentrate on our games. That way all I have to worry about is how I’m playing.”

Paul said the girls’ growth as sisters has been impressive.

“When one has a bad day, the other one is always there to pump them back up,” he said. “They both respect each others’ game and are willing to take advice from each other. It’s been great watching them be there for one another.”