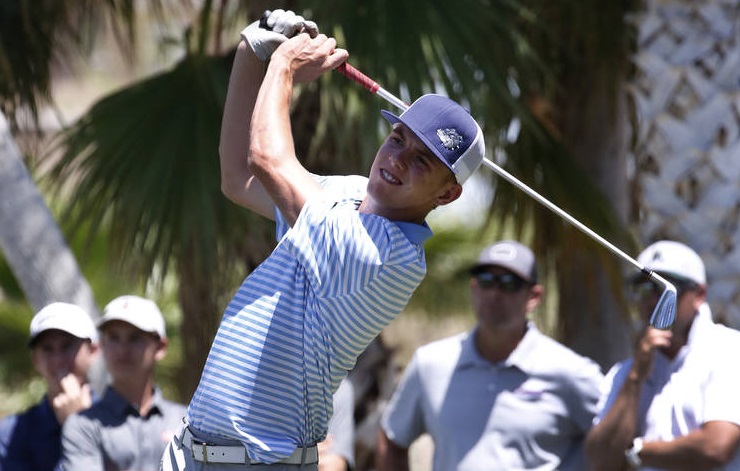 Cole Thompson, a Centennial High senior and San Diego State commit, has been an SNJGA member since 2016 and was arguably a favorite to win the 2020 Nevada State High School state title. But the ongoing Coronavirus emergency has paused, and possibly canceled, the high school season. Thompson retains a positive perspective and is preparing for his collegiate career, while fondly recalling his junior golf memories. –By Brian Hurlburt, Las Vegas Golf Insider.

This year isn’t the first time Thompson has dealt with missing a high school golf season as he has suffered injuries twice during his career. However, in his one entire season as a sophomore, he was named All-State on the course and made the All-Academic team off of it. He suffered the two injuries while playing basketball for Centennial. As a freshman, he missed the golf season with torn ligaments in his right ankle and missed his junior year due to a broken hand. Thompson probably shares a similar emotion as many of his fellow athletes who are also missing their cherished final seasons.

“In the moment, it felt very unnecessary to cancel the season (this year) and selfishly I wish the season would’ve continued, but as time went on and I learned how severe the virus is, I realized this pandemic is much bigger than high school sports,” Thompson says.

As of March 27, the Nevada Interscholastic Athletic Association is still potentially planning to hold a regional and state tournament, but plans are unfolding as the Coronavirus emergency continues.

“When I think about playing in the SNJGA, I think about the good quality of courses and the strong fields that are attracted to the events,” Thompson says.

Thompson believes the strenght of his game his driving and is spending time currently working hard on his putting. Thompson has worked on his game with former PGA Tour player and Las Vegas Golf Hall of Fame inductee Bob May over the years. He now has his sights set on big things at San Diego State beginning this fall.

“The coaching staff really was the deciding factor for me to select San Diego State, but initially the location and facilities were the main attractions,” Thompson says. “I plan to major in business management. The ultimate goal is to graduate with a degree along with a national championship ring.”

Thompson’s major influence in golf has been his father, Jason, who is also a golfer. His father also coached him in other sports growing up.

As a difficult present situation unfolds, an up and coming golfer aspires to a brighter future, fueled by self-motivation and a father’s guidance.