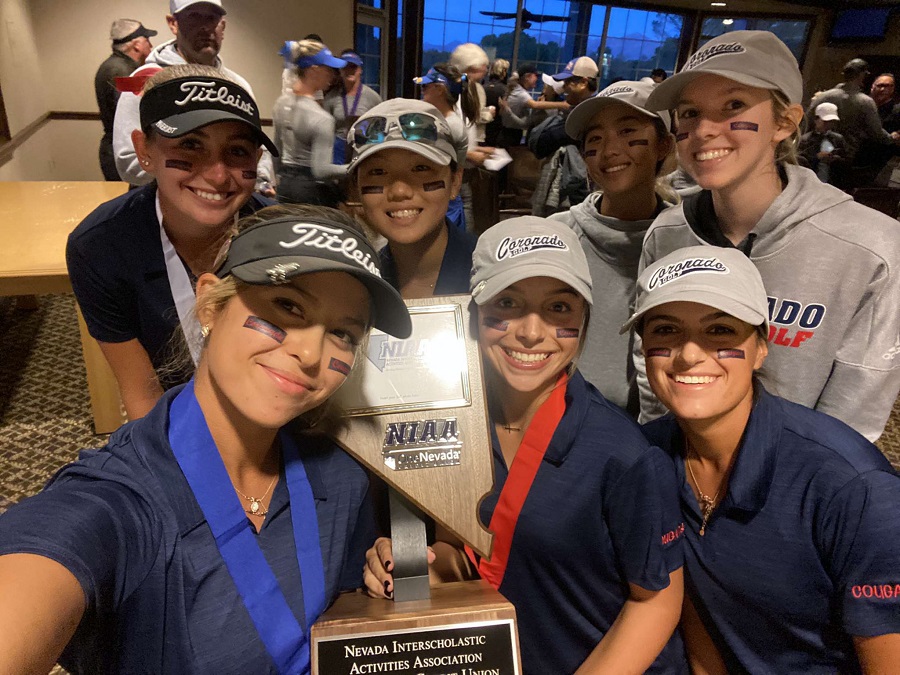 At the recent Nevada State High School Golf Championships from 2A-5A, Southern Nevada Junior Golf Association members did quite nicely, winning individual titles and leading their schools to team titles. In 5A, 9 of the top 10 finishers were SNJGA members and Coronado High School was the team champion and featured SNJGA members throughout the roster. Here’s some additional breakdown. –By Brian Hurlburt, LasVegasGolfInsider.com

LINK TO ALL FINAL RESULTS

It was the Coronado girls golf team’s fifth state title under head coach Joe Sawaia, and it is a group that is unmatched in his opinion.

“What comes to mind with this group is just just how talented they are,” Sawaia said. “I’ve never been around a group that has five players, men or women, who could be low medalist at any time. I mean, literally, we never knew who was going to be medalist. Their depth is just incredible. We’ve had good teams, don’t get me wrong, but with this group, there is really nothing they’re going to do on the golf course that surprises me because I know their abilities. ”

“Our team is very close with each other, which is pretty special,” Wilson said. “We all had the same goal to win state, and since we are very competitive, we all worked hard to capture the win and our coaches were very helpful and supportive throughout the season. For me personally, winning the individual title has been one of my goals since I was a little kid. Before coming into high school, I had a goal of becoming the first freshman from Coronado to win state as an individual, and because Covid-19 wiped out our season last year, I was driven to win this year. Being four shots back after the first round, I was determined to go low during the final round. I had a great second round and I’m glad I finished like a Coronado Cougar.”

In the state 4A division, Basic won the team title and was led by individual champ Cienna Cabrera. Violet Ritter from Cimarron-Memorial was second.

“The first thing that comes to my mind about winning the 4a state title is absolute shock,” Cabrera said. “In fact, I’m almost speechless, too. To have made it that far as a team and individual, and then win is something that I don’t think has happened in Basic history in a while. Even with the walk to the 36th green, I knew in my head that I had won state. I was in shock but still had the biggest smile on my face. Nearly a week later, I’m still living in that moment of hearing my name called out and everyone cheering for me. It really was the best feeling.”

Cabrera is an active participant in the SNJGA and the junior also has an eye toward the future.

“When it comes to SNJGA, the first thing I think of is getting to play with all the girls,” Cabrera said. “I’ve played with some of these girls for seven years now, they mean the world to me. So even though it’s a tournament and the goal is to win, it never feels like a competition. It’s always fun! Along with playing with my friends, I do put a lot of thought into the courses we play at too. We get the opportunity to play at some amazing courses throughout the state and all I think to myself it ‘Wow I’m so lucky.’ So, playing with friends and playing beautiful courses, what more can I ask for.

“My plans after high school is to continue playing golf at the collegiate level. My dream school, if I could choose anywhere to go, would be the University of Oregon!! I hope to continue my golf career as a duck and go on from there.”

In the state 3A division, Douglas won the team title. The top individual finisher was Camryn Schaper, a junior, from Boulder City. She is the daughter of Boulder City golf general manager Andy Schaper, who coaches Boulder City.

“I am very proud of myself for finishing 3rd at state,” Schaper said. “Golf is something that has been in my life forever and it’s nice to finally see my hard work pay off. The first thing that comes to mind when I think of the SNJGA is a community of people who share the same love for golf as me. I’ve met some awesome people through SNJGA tournaments.”

In the state 2A division, The Meadows won the team title led by Mizara Norton, the individual champ.