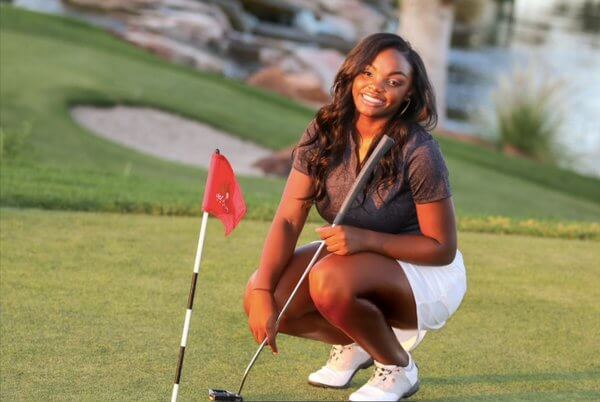 There’s Plenty of Faith in Golf, College for McKinney

Faith McKinney has a map of her future already on the drawing board. And golf will be front and center on that road map, every step along the way including as she heads to play golf at Chicago State University. In fact, the path she is on included her early days on the links in middle school. To say she has drive to succeed would be perfect. –by Bill Bowman, Las Vegas Golf Insider staff.

McKinney looks back on the early days of her golf career as a stepping stone to her recent news that she has received a golf scholarship to play at Chicago State University.

The senior at Faith Lutheran looks back on her seventh grade golf team as a big moment in her career.

“I made the seventh grade team and I said, OK, I can do this,” she said. “Then when I made the freshman team I said, Oh, yeah, I’ve got this.”

She’s been working steadily, both on and off the course, to make sure she does have this. And that showed up with a golf scholarship to Chicago State as well as an added bonus.

McKinney is now one of those students. And she couldn’t be prouder.

“That really boosted my confidence,” she said of the honor. “I didn’t know how many students were applying but for me to be picked was absolutely amazing. It showed me that if there’s something I want, I need to go for it. It also showed the hard work shows up and pays off.”

She added the SNJGA program was also very instrumental in her success.

“I’ve been a part of it for so many years,” she said. “The people running it have always been there to help out any way they can. They have let me volunteer for events and I’ve made so many amazing friends. And I’ve gotten to play in really great tournaments. It’s just been a tremendous experience. I’m just sad I’m too old to play in the tournaments now but it’s been an experience I will always remember.”

Now it’s time to look forward to the college experience.

“Going into college, I think there are a couple of other new girls so I really don’t know what everybody is bringing into the experience,” said McKinney, who plans to major in criminal justice. “But my No. 1 goal is to make the travel team.”

As for a long-range goal, it’s simple: “I’d really like to be on the LPGA Tour,” she said. “I’m hoping to show up during my years in college to make that possible.”

As for what part of her game she feels still needs work, she had a quick answer.

“It’s my mental state,” she said. “That’s my biggest hurdle. Once I get the mental part under control, I feel like I’ll be unstoppable.”