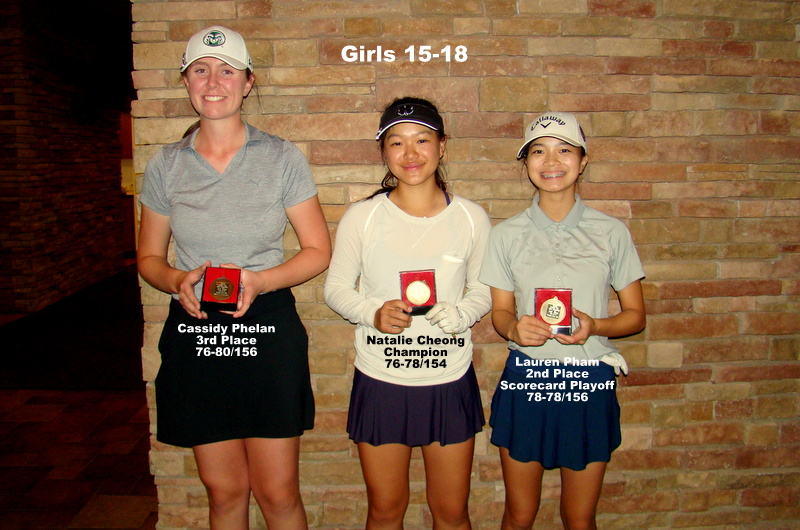 Blake Schaper, son of Andy Schaper, Director of Golf Operations at both Boulder City courses, won for the first time with a little home field advantage in the Boys 15-18 age group.  Points leader Jackson Parrish lead after day one with a nice three under par 69 to Blake’s 71 at Boulder City Muni, the easier of the two tracks.  Justin Penor and Colin Wesolek each scored 72 to also be in the hunt for the championship. Boulder Creek proved to be a challenge as no players scored under par.  The winds picked up day two and quickly the event turned into a two-person race to the finish.  Jackson was in control at the turn, with a front nine score of 37 to Blakes 38 extending his lead to three strokes.  But Blake was not to be denied with a nice even par 36 to Jackson’s 40, enabling Blake to pass him and take the championship.  It came down to the last hole, Blake pared, and Jackson bogeyed.  Third went to Andrew Hawk (77-75/152) in a scorecard playoff with Will Dexheimer (76-76/152).  Shinfei Quek who travels from Utah to play in our events scored 75-78/153, 5th place, with one of his better finishes.

Bradley Bourn shows no sign of letting up in another dominating performance in the boys 12-14.  Bradley scored 73-73/146 to win by twenty shots over second place Vincent Forbes 81-85/166. This is Bradley’s 5th win of the year and he is currently the points leader in his age group.  Third place went to Seamus Byrne with rounds of 81-90/171.

The Girls 12-14 also was close with Haram Lee scoring 79-80/159 to finish first over 11-year-old Emmerson Hinds who was playing for the first time on the SNJGA Tour. Emmerson scored 83-78/161.  Third went to Rivers Abigail Common who started the day one back but had some troubles and finished with 80-90/170.

Congratulations to all the top finishers and players, but the big winner this weekend was the weather, it was absolutely perfect for this time of year.

See you soon at the Turkey Shootout, Nov. 26, one of the more fun events we play all year, don’t miss out. Sign up early, it’ sure to fill up at Angel Park Cloud Nine. RESERVE NOW