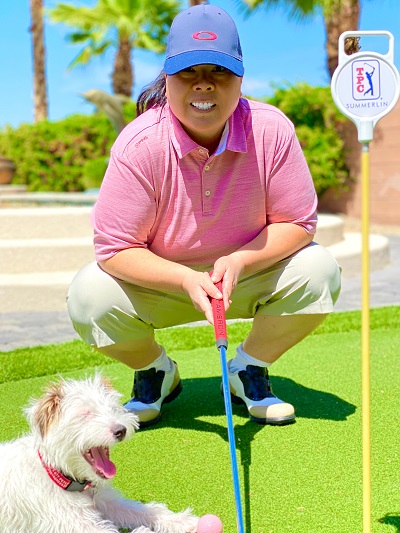 Posted at 09:42h in Alumni, News by Brian Hurlburt

Former SNJGA member Kari Higa is a champion–proven by the many junior events, high school state championship and women’s amateur tournaments she has won–but early on it wasn’t that way. Higa, 44, traces her winning ways to a special day with her father during an SNJGA event. The rest, as they say, is history. –By Brian Hurlburt, Las Vegas Golf Insider.

“I remember that when I first started playing junior golf, I didn’t win at first, but I played in a Parent/Junior tournament with my dad about a year after I started playing  and we won the tournament,” Higa says. “After that, I started winning a lot of tournaments on my own.”

Higa, now a TPC at Summerlin member, was a force in junior golf and then translated that success to high school, at Bonanza, where she was a part of two team state championships and also won the 1992 individual title.

“When I was playing for Bonanza, I remember we won every regular-season match we played for the four years I was there,” Higa says. “Our home course was Los Prados. Back then it was a new development, now when I play golf at Los Prados, I can’t believe how much it has changed.”

Higa then played for year-and-a-half at University of Hawaii, Manoa, but the distance between her and loved ones pulled her back to Southern Nevada.

“I would have loved to play for UNLV, but back then they didn’t have a women’s golf team,” Higa says. “I got home sick and ended up coming home and graduating from UNLV with a degree in marketing.”

As for everyone and nearly everything, recent events have detoured Higa’s golf plans. Higa won the Nevada State Women’s Amateur in 2004 and has also won other top local and state events. Her focus was on another championship in 2020.

“I was looking forward to playing in this year’s Nevada State Quad tournament– the only Nevada State Tournament I haven’t won–but it was cancelled,” says a disappointed Higa. “When I was younger, I played more individual tournaments, but as I get older I play in more partners and team tournaments. For me golf is more enjoyable playing as a team with other people.”

Besides the wins, Higa has had some indelible moments while playing the grand ole game.

“A couple of year’s ago I was playing in team play at Highland Falls in Summerlin and I started off on the first hole with a birdie, then holed out with an eagle  on the second hole and then birdied the third hole,” says Higa. “That was the best start that I have ever had.”

High also recorded a double-eagle at Spanish Trail in 2004 and has won several club championships there.